It's been a long time since I wrote a blog post about my old .NET vulnerabilities. I was playing around with some .NET code and found an issue when serializing delegates inside a CAS sandbox, I got a SerializationException thrown with the following text:

I couldn't remember if this has always been there or if it was new. I reached out on Twitter to my trusted friend on these matters, @blowdart, who quickly fobbed me off to Levi. But the take away is at some point the behavior of Delegate serialization was changed as part of a more general change to add Secure Delegates.

It was then I realized, that it's almost certainly (mostly) my fault that the .NET Framework has this feature and I dug out one of the bugs which caused it to be the way it is. Let's have a quick overview of what the Secure Delegate is trying to prevent and then look at the original bug.

.NET Code Access Security (CAS) as I've mentioned before when discussing my .NET PAC vulnerability allows a .NET "sandbox" to restrict untrusted code to a specific set of permissions. When a permission demand is requested the CLR will walk the calling stack and check the Assembly Grant Set for every Stack Frame. If there is any code on the Stack which doesn't have the required Permission Grants then the Stack Walk stops and a SecurityException is generated which blocks the function from continuing. I've shown this in the following diagram, some untrusted code tries to open a file but is blocked by a Demand for FileIOPermission as the Stack Walk sees the untrusted Code and stops. 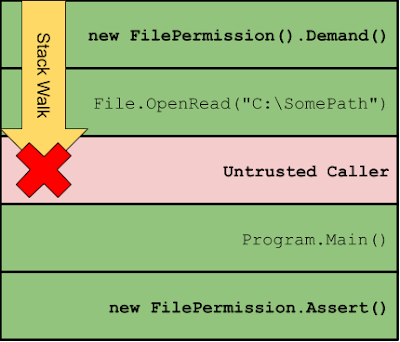 What has this to do with delegates? A problem occurs if an attacker can find some code which will invoke a delegate under asserted permissions. For example, in the previous diagram there was an Assert at the bottom of the stack, but the Stack Walk fails early when it hits the Untrusted Caller Frame.

However, as long as we have a delegate call, and the function the delegate calls is Trusted then we can put it into the chain and successfully get the privileged operation to happen. 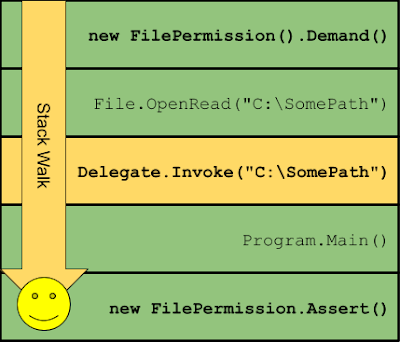 The problem with this technique is finding a trusted function we can wrap in a delegate which you can attach to something such a Windows Forms event handler, which might have the prototype:
void Callback(object obj, EventArgs e)

and would call the File.OpenRead function which has the prototype:

That's a pretty tricky thing to find. If you know C# you'll know about Lambda functions, could we use something like?

Unfortunately not, the C# compiler takes the lambda, generates an automatic class with that function prototype in your own assembly. Therefore the call to adapt the arguments will go through an Untrusted function and it'll fail the Stack Walk. It looks something like the following in CIL:

Turns out there's another way. See if you can spot the difference here.

We're still using a lambda, surely nothing has changed? We'll let's look at the CIL.

That's just crazy. What's happened? The key is the use of Expression. When the C# compiler sees that type it decides rather than create a delegate in your assembly it'll creation something called an expression tree. That tree is then compiled into the final delegate. The important thing for the vulnerability I reported is this delegate was trusted as it was built using the AssemblyBuilder functionality which takes the Permission Grant Set from the calling Assembly. As the calling Assembly is the Framework code it got full trust. It wasn't trusted to Assert permissions (a Security Transparent function), but it also wouldn't block the Stack Walk either. This allows us to implement any arbitrary Delegate adapter to convert one Delegate call-site into calling any other API as long as you can do that under an Asserted permission set. 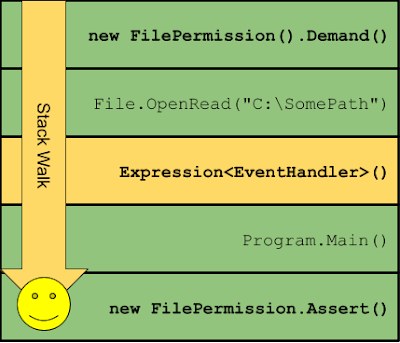 I was able to find a number of places in WinForms which invoked Event Handlers while asserting permissions that I could exploit. The initial fix was to fix those call-sites, but the real fix came later, the aforementioned Secure Delegates.

Silverlight always had Secure delegates, it would capture the current CAS Permission set on the stack when creating them and add a trampoline if needed to the delegate to insert an Untrusted Stack Frame into the call. Seems this was later added to .NET. The reason that Serializing is blocked is because when the Delegate gets serialized this trampoline gets lost and so there's a risk of it being used to exploit something to escape the sandbox. Of course CAS is dead anyway. 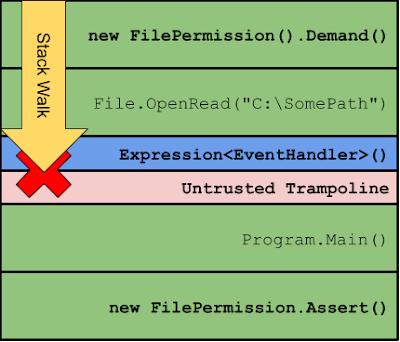 Anyway, these are the kinds of design decisions that were never full scoped from a security perspective. They're not unique to .NET, or Java, or anything else which runs arbitrary code in a "sandboxed" context including things JavaScript engines such as V8 or JSCore.