This is the start of a very short series on some of my old .NET vulnerabilities which have been patched. Most of these issues have never been publicly documented, or at least there have been no PoCs made available. Hopefully it's interesting to some people.

The first vulnerability I'm going to talk about is CVE-2012-4776 which was fixed in MS12-074. It was an issue in the handling of Web Proxy Auto-Configuration scripts (PAC). It was one of the only times that MS has ever credited me with a RCE in .NET since they made it harder to execute .NET code from IE. Though to be fair making it harder might be partially my fault.

The purpose of a PAC script, if you've never encountered one before, is to allow a web client to run some proxy decision logic before it connects to a web server. An administrator can configure the script to make complex decisions on how outbound connections are made, for example forcing all external web sites through a gateway proxy but all Intranet connections go direct to the server. You can read all about it on Wikipedia and many other sites as well but the crucial thing to bear in mind is the PAC script is written in Javascript. The most basic PAC script you can create is as follows:
On Windows if you use the built-in HTTP libraries such as WinINET and WinHTTP you don't need to worry about these files yourself, but if you roll your own HTTP stack, like .NET does, you'd be on your own to reimplement this functionality. So when faced with this problem what to do? If you answered, "let's use a .NET implementation of Javascript" you'd be correct. Some people don't realise that .NET comes with its own implementation of Javascript (JScript for licensing reasons). It even comes with a compiler, jsc.exe, installed by default.

While I was having a look at .NET, evaluating anything interesting which asserts full trust permissions I came across the .NET PAC implementation. The following method is from the System.Net.VsaWebProxyScript class in the Microsoft.JScript assembly (some code removed for brevity):
The code is taking the PAC script from the remote location as a string, putting it together with some boiler plate code to implement the standard PAC functions and compiling it to an assembly. This seems too good to be true from an exploit perspective. It was time to give it a try so I configured a simple .NET application with a PAC script by adding the following configuration to the application:
Of course in a real-world scenario the application probably isn't going to be configured like this. Instead the proxy settings might be configured through WPAD, which is known to be spoofable or the system settings. When the application makes a connection using the System.Net.WebClient class it will load the PAC file from the scriptLocation and execute it. With a test harness ready let's try a few things:
This printed out "Hello World!" as you'd expect, so we can compile and executing JScript.NET code. Awesome. So let's go for the win!
And... it fails, silently I might add :-( I guess we need to get to the bottom of this. When dealing with the internals of the framework I usually find it easiest to get WinDBG involved. All .NET frameworks come with a handy debugger extension, SOS, which we can use to do low-level debugging of .NET code. A quick tutorial, open the .NET executable in WinDBG and run the following two lines at the console.
What these lines do is set WinDBG to stop on a CLR exception (.NET uses Windows SEH under the hood to pass on exceptions) and adds a handler to load the SOS library when the DLL mscorwks gets loaded. This DLL is the main part of the CLR, we can't actually do any .NET debugging until the CLR is started. As a side note, if this was .NET 4 and above replace mscorwks with clr as that framework uses clr.dll as its main implementation.

Restarting the execution of the application we wait for the debugger to break on the CLR exception. Once we've broken into the debugger you can use the SOS command !pe to dump the current exception: 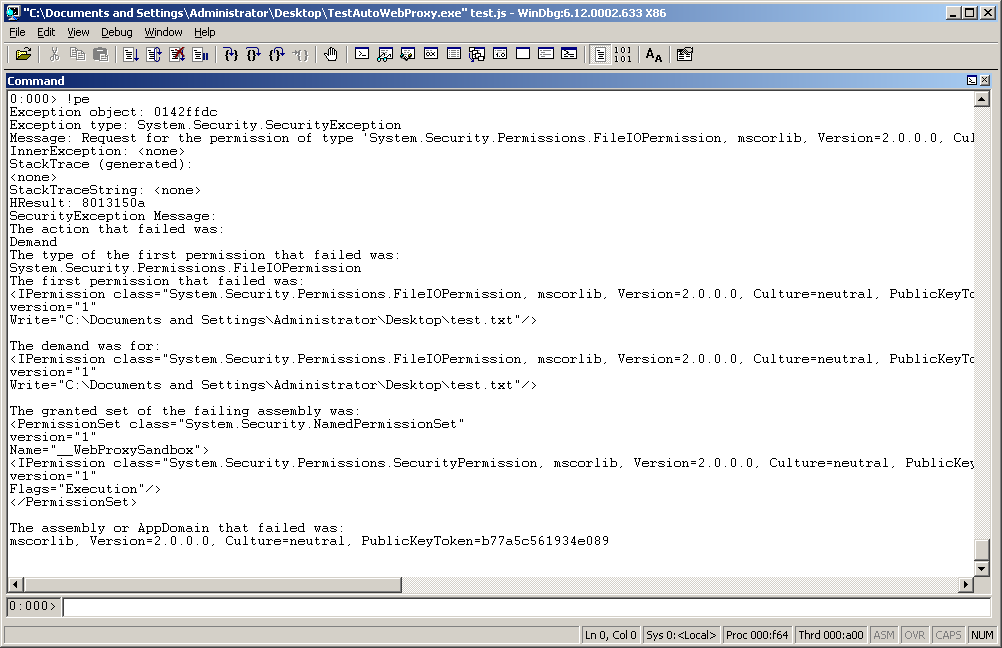 Well no surprises, we got a SecurityException trying to open the file we specified. Now at this point it's clear that the PAC script must be running in Partial Trust (PT). This isn't necessarily an issue as I still had a few PT escapes to hand, but would be nice not to need one. By dumping the call stack using the !clrstack command we can see that the original caller was System.Net.AutoWebProxyScriptWrapper.

Looking at the class it confirms our suspicions of being run in PT. In the class' CreateAppDomain method it creates an Internet security AppDomain which is going to be pretty limited in permissions then initializes the System.Net.VsaWebProxyScript object inside it. As that class derives from MarshalByRefObject it doesn't leave the restricted AppDomain. Still in situations like this you shouldn't be disheartened, let's go back and look at how the assembly was being loaded into memory. We find it's being loaded from a byte array (maybe bad) but passing a null for the evidence parameter (awesome). As we can see in the remarks from Assembly.Load this is a problem:
So what we end up with is an assembly which inherits its permissions from the calling assembly. The calling assembly is trusted framework code, which means our compiled PAC code is also trusted code. So why doesn't the file function work? Well you have to remember how security in AppDomains interact with the security stack walk when a demand for a permission is requested.

The transition between the trusted and the untrusted AppDomains acts as a PermitOnly security boundary. What this means is that even if every caller on the current stack is trusted, if no-one asserts higher permissions than the AppDomain's current set then a demand would fail as shown in the below diagram: 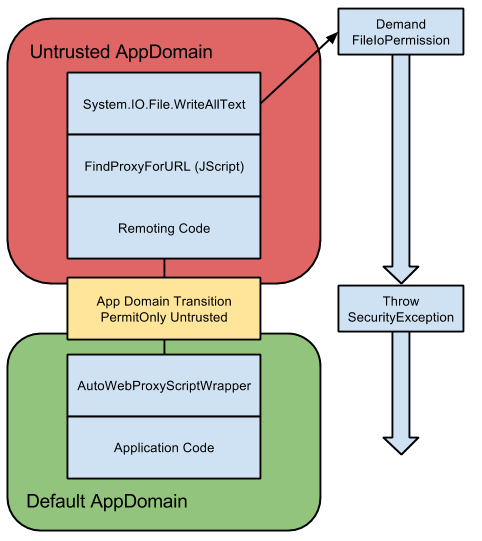 There are plenty of ways around this situation, in fact we'll see a few in my next post on this topic. But for now there's an easy way past this issue, all we need is something to assert suitable permissions for us while we run our code. Turns out it was there all along, the original Load method uses the attribute form of permission assertion to assert full trust.
We can get code to run in that method because the loading of the assembly will execute any global JScript code automatically, so a quick modification and we get privileged execution:
Why couldn't we have just done a new PermissionSet(PermissionState.Unrestricted).Assert() here? Well if you look at the code being generated for compilation it sets the SecurityTransparent assembly attribute. This tells the CLR that this code isn't allowed to elevate its permissions, but it's transparent to security decisions. If you have a trusted assembly which is transparent it doesn't effect the stack walk at all, but it also cannot assert higher permissions. This is why the assertion in the Load method was so important. Of course this assertion was what originally led me to finding the code in the first place.

Microsoft fixed this in two ways, first they "fixed" the JScript code to not execute under a privileged permission set as well as passing an appropriate evidence object to the Assembly load. And secondly they basically blocked use of JScript.NET by default (see the notes in the KB article here). If you ever find a custom implementation of PAC scripts in an application it's always worth a quick look to see what they're using.