I've been going through the various token privileges on Windows trying to find where they're used. One which looked interesting is SeTrustedCredmanAccessPrivilege which is documented as "Access Credential Manager as a trusted caller". The Credential Manager allows a user to store credentials, such as web or domain accounts in a central location that only they can access. It's protected using DPAPI so in theory it's only accessible when the user has authenticated to the system. The question is, what does having SeTrustedCredmanAccessPrivilege grant? I couldn't immediately find anyone who'd bothered to document it, so I guess I'll have to do it myself.

The Credential Manager is one of those features that probably sounded great in the design stage, but does introduce security risks, especially if it's used to store privileged domain credentials, such as for remote desktop access. An application, such as the remote desktop client, can store domain credential using the CredWrite API and specifying the username and password in the CREDENTIAL structure. The type of credentials should be set to CRED_TYPE_DOMAIN_PASSWORD.

An application can then access the stored credentials for the current user using APIs such as CredRead or CredEnumerate. However, if the type of credential is CRED_TYPE_DOMAIN_PASSWORD the CredentialBlob field which should contain the password is always empty. This is an artificial restriction put in place by LSASS which implements the credential manager RPC service. If a domain credentials type is being read then it will never return the password.

How does the domain credentials get used if you can't read the password? Security packages such as NTLM/Kerberos/TSSSP which are running within the LSASS process can use an internal API which doesn't restrict the reading of the domain password. Therefore, when you authenticate to the remote desktop service the target name is used to lookup available credentials, if they exist the user will be automatically authenticated.

If we have administrator privileges getting access the password is trivial. Read the Mimikatz wiki page to understand the various ways that you can use the tool to get access to the credentials. However, it boils down to one of the following approaches:

For example, Nirsoft's CredentialsFileView seems to use the injection into LSASS technique to decrypt the DPAPI protected credential files. (Caveat, I've only looked at v1.07 as v1.10 seems to not be available for download anymore, so maybe it's now different. UPDATE: it seems available for download again but Defender thinks it's malware, plus ça change).
At this point you can probably guess that SeTrustedCredmanAccessPrivilege allows a caller to get access to a user's credentials. But how exactly? Looking at LSASRV.DLL which contains the implementation of the Credential Manager the privilege is checked in the function CredpIsRpcClientTrusted. This is only called by two APIs, CredrReadByTokenHandle and CredrBackupCredentials which are exported through the CredReadByTokenHandle and CredBackupCredentials APIs.
The CredReadByTokenHandle API isn't that interesting, it's basically CredRead but allows the user to read from to be specified by providing the user's token. As far as I can tell reading a domain credential still returns a blank password. CredBackupCredentials on the other hand is interesting. It's the API used by CREDWIZ.EXE to backup a user's credentials, which can then be restored at a later time. This backup includes all credentials including domain credentials. The prototype for the API is as follows:
BOOL WINAPI CredBackupCredentials(HANDLE Token,
LPCWSTR Path,
PVOID Password,
DWORD PasswordSize,
DWORD Flags);
The backup process is slightly convoluted, first you run CREDWIZ on your desktop and select backup and specify the file you want to write the backup to. When you continue with the backup the process makes an RPC call to your WinLogon process with the credentials path which spawns a new copy of CREDWIZ on the secure desktop. At this point you're instructed to use CTRL+ALT+DEL to switch to the secure desktop. Here you type the password, which is used to encrypt the file to protect it at rest, and is needed when the credentials are restored. CREDWIZ will even ensure it meets your system's password policy for complexity, how generous.
CREDWIZ first stores the file to a temporary file, as LSASS encrypts the encrypted contents with the system DPAPI key. The file can be decrypted then written to the final destination, with appropriate impersonation etc.
The only requirement for calling this API is having the SeTrustedCredmanAccessPrivilege privilege enabled. Assuming we're an administrator getting this privilege is easy as we can just borrow a token from another process. For example, checking for what processes have the privilege shows obviously WinLogon but also LSASS itself even though it arguably doesn't need it.
PS> $ts = Get-AccessibleToken
PS> $ts | ? {
"SeTrustedCredmanAccessPrivilege" -in $_.ProcessTokenInfo.Privileges.Name
}
TokenId Access                                  Name
------- ------                                  ----
1A41253 GenericExecute|GenericRead    LsaIso.exe:124
1A41253 GenericExecute|GenericRead     lsass.exe:672
1A41253 GenericExecute|GenericRead winlogon.exe:1052
1A41253 GenericExecute|GenericRead atieclxx.exe:4364
I've literally no idea what the ATIECLXX.EXE process is doing with SeTrustedCredmanAccessPrivilege, it's probably best not to ask ;-)
To use this API to backup a user's credentials as an administrator you do the following.
If it all goes well you'll have all the of the user's credentials in a packed binary format. I couldn't immediately find anyone documenting it, but people obviously have done before. I'll leave doing all this yourself as a exercise for the reader. I don't feel like providing an implementation. 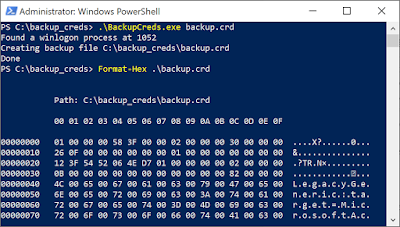 Why would you do this when there already exists plenty of other options? The main advantage, if you can call it that, it you never touch LSASS and definitely never inject any code into it. This wouldn't be possible anyway if LSASS is running as PPL. You also don't need to access the SECURITY hive to extract DPAPI credentials or know the user's password (assuming they're authenticated of course). About the only slightly suspicious thing is opening WinLogon to get a token, though there might be alternative approaches to get a suitable token.
Posted by tiraniddo at 00:03