Don't Use SYSTEM Tokens for Sandboxing (Part 1 of N)

As I mentioned in the last post it's possible to configure services with a limited set of privileges. For example you can have a service where you're only granted SeTimeZonePrivilege and every other default privilege is removed. Interestingly you can do this for any service running as SYSTEM. We can check what services are configured without SeImpersonatePrivilege with the following PS.

Let's see a diagram for the checks to determine if you're allowed to impersonate a Token. You might know it if you've seen any of my presentations, or read part 3 of Reading Your Way Around UAC. 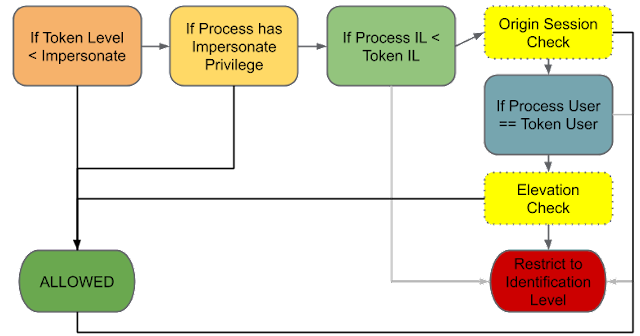 Actually this diagram isn't exactly like I've shown before I changed one of the boxes. Between the IL check and the User check I've added a box for "Origin Session Check". I've never bothered to put this in before as it didn't seem that important in the grand scheme. In the kernel call SeTokenCanImpersonate the check looks basically like:

Not convinced? We can test it from an admin PS shell. First create a SYSTEM PS shell from an Administrator PS shell using:

Now in the SYSTEM PS shell check the current Token's Authentication ID (yes I know Pseduo is a typo ;-)).

Next remove SeImpersonatePrivilege from the Token:

Now pick a normal user token, say from Explorer and dump the Origin.

As we can see the Origin matches the SYSTEM Authentication ID. Now try and impersonate the Token and check what the resultant impersonation level assigned was:

If you think I've made a mistake we can force failure by trying to impersonate a SYSTEM token but at a higher IL. Run the following to duplicate a copy of the current token, reduce IL to High then test the impersonation level.

As we can see, the level has been set to Identification. If SeImpersonatePrivilege was being granted we'd have been able to impersonate the higher IL token as the privilege check is before the IL check.

Is this ever useful? One place it might come in handy is if someone tries to sandbox the SYSTEM user in some way. As long as you meet all the requirements up to the Origin Session Check, especially IL, then you can still impersonate other users even if that's been stripped away. This should work even in AppContainers or Restricted as the check for sandbox tokens happens after the session check.

The take away from this blog should be: